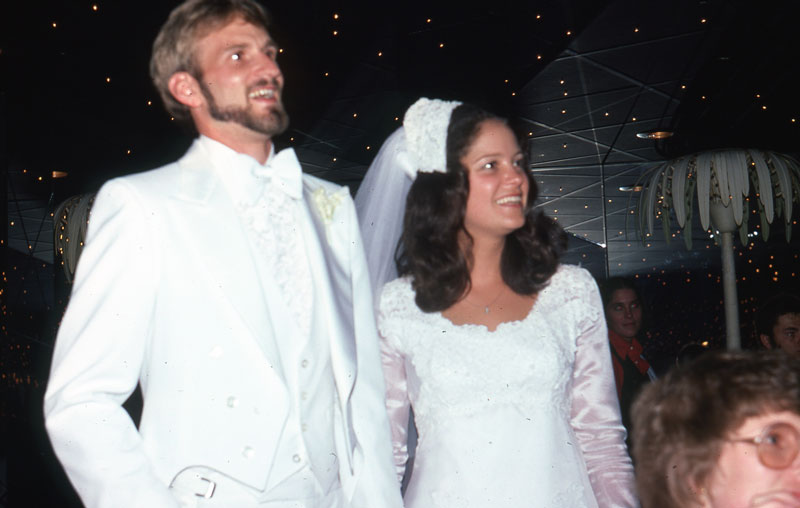 This month my wife and I celebrate forty years of marriage. It’s a personal record for both of us since we’ve never been married before. My immediate thoughts include gratitude to God for making this possible and sustaining us through the ups and downs. We’ve witnessed God’s favor in many different ways.

The background for the title is as follows: My parents decided to move to Arlington, Texas from Henderson Harbor, New York in 2007. They visited for a few months in 2006 and 2007 to check out retirement facilities before moving. They sold their house and cottage in Henderson Harbor, sold or donated most of their belongings and their remaining belongings were trucked to Arlington by my brother David and another person. I drove our parents to Texas in September.

Mom delighted in telling people that she told Dad, “I followed you during your career and now it’s your turn to follow me.” She decided they would move to Arlington where David and I lived, as well as, some nieces, nephews and grandchildren in the Dallas-Fort Worth area. Dad wasn’t a happy camper leaving the North Country, but he didn’t wear it on his coat sleeve all the time. Happy or unhappy, Dad moved with Mom to Arlington. I viewed it as one of the best moves for the family members in DFW.

Mom and Dad celebrated their 62ndwedding anniversary in September 2009 at Red Lobster with Jan, me and our Iranian friends Hoda and Reza. Mom died three months later in December. Dad was lost for a time as a widower, but he eventually took a fancy to a single woman at the retirement facility. This didn’t last and Dad befriended another resident and they remained friends until Dad died in April 2014.

Jan didn’t forget Mom’s comment. She amended it to “I’ve followed Judson during his ministerial career and now it’s time for him to follow me.” She wanted us to join her two sisters on the Florida Panhandle. We bought a house lot in the same development as them, not knowing if we could afford to build on it or not. After eight years of dreaming, saving and planning, we built our new house and we are Floridians….all because we heard Mom say it was time for Dad to follow her to Arlington.

Marriage can be like that. One spouse’s career takes precedence for many years and then the other spouse declares that it’s time for the other to follow. Following is an intriguing element in marriage. Sometimes one person leads; another time the other person leads. Jan is a visionary and I’m a contemplator trying to figure out the feasibility of following her vision, or maybe more accurately, trying to figure out a way for us to do things my way.

Relocating to Florida included about seven months of living apart. We deployed Jan to Florida in September 2017 and I remained in Arlington until I retired in March 2018.  I joined her in her sister’s house in the third-floor studio apartment which was a tremendous blessing and a challenge. Jan worked nights at the hospital, so she needed quiet and darkness during the days. She was also consumed with the details of the house build night and day.  I found myself living on the edge, angry at times, lonely and left out. We had arguments. I struggled emotionally to keep above water. I also started a part-time job that took away more time to be together. We were like two ships passing each other in the night. It was an extremely difficult time for me.

We moved into our new house in August 2018. We love it and I’m feeling more at home in Florida. Retiring and relocating to a strange place combined to test my patience, stability, and hope. I think I can identify somewhat with my Dad when he agreed to move to Texas. Leaving established friendships and familiarity to enter the land of being a stranger was very unsettling for me. How could I foresee the depths of the emotional impact of the changes?

Besides the deep gratitude mentioned at the beginning, I have also learned much more about helping make another person’s dream a reality. Yes, I have been following Jan. Am I less of a man to follow my wife’s dream? Am I too much into myself not to follow her? I wouldn’t have chosen the Panhandle of Florida as a retirement destination, but Jan did, and I’m learning a new aspect of humility and adventure. The best is yet to come.

Throughout this transition period that brings us to our 40thwedding anniversary, I’ve experienced a deeper closeness with Jesus Christ. Jesus is teaching me that true greatness is in serving others, and in my case, particularly, Jan. Please don’t jump to the conclusion that I’ve perfected the art of being a servant, but it is drawing me closer to Jesus’ heart who came “not to be served, but to serve and to give his life…” Yes, I want Jan’s attention, affection, and admiration, but loving service is the best route to experience those in any relationship. She’s worth it, so I’ll love her for another forty years. Happy 40thanniversary, honey.

Here are some reflection questions:

What kind of experiences have you had in leading and following your spouse?

What have you found helpful in being a servant in your marriage?

How has faith in God sustained you in following your spouse?